Alternate bid - Work that the owner can elect to include or exclude in the contract.

Assembly - Assemblies are groups of material items included in estimating software which are used to speed up the estimating process. A thorough understanding of the use of assemblies can double your estimating speed.

Assembly Example 2: A 3 Gang Switch Assembly would include 1-3 gang j box, 1- 3 gang plaster ring, 3 switches and 1 3 gang switch plate. When using electrical estmating software you count plugs and switches and do not have to count every piece and part of material.

Base bid - The main bid requested by the customer. Usually the base bid covers the major scope of the work.

Bid Review - A bid review is when you take a detailed look at the estimate and evaluate it to make sure that you have included everything. It is preferably done by more than one person, and is usually done just before the bid is due for delivery to the bid requestor. Last minute changes are often made to the estimate during the bid review. Good estimating softwares have a recap feature that assists you in analyzing and checking the estimated labor and material costs.

Exclusions - Exclusions in an Electrical Estimate are statements written onto a proposal to communicate work or materials which are NOT included in the estimate price.

Inclusions - Inclusions in a proposal describe work and materials which are included in the price.

Job Expenses - Job expenses are non-material costs which form part of the project. Items such as core drilling, forklift, ground fault testing, and man lift are examples of job expenses.

Job Walk - A job walk is the act of surveying and inspecting the job site to see the job physical conditions. It is often conducted by the prime contractor and is attended by all of the trades that are bidding the job.

Material Take-off - A list of materials required to complete a given job. Take-off refers to taking off (a list) from a set of blueprints. Often times expenses such as permits, forklifts, or other equipment are also included in the material take-off. Each material item has an associated cost and requires a certain amount of (labor) time to install. When you enter the list of materials into estimating software, the program provides the cost of materials plus the labor required to install them.

Material Quotes - In order to get material pricing to calculate your cost of materials, you get quotes from your supplier. You make a complete list of materials and usually show items such as switch gear, lighting and general materials. Switch gear and lighting get quoted by different vendors. Estimating software often has many material items pre-priced. When you use estimating software, items such as conduit and fittings, wire, devices and junction boxes are often priced by the software. Other items may frequently vary in price. You would request quotes for these items from suppliers prior to submitting an estimate.

Proposal - A proposal is the "deliverable" that you present to your customer which shows your asking price to do a job or project. The Proposal should contain exact language defining what you are including, what you are excluding and the items you need to qualify in your bid. Good estimating software assists by automatically transferring the bid calculations directly to professional looking proposal, thus reducing potential errors.

Qualifications - Qualifications are explanations in the written proposal to clarify your bid. Example: Work is to be performed between the hours of 8 AM to 5 PM Monday thru Friday.

Recap - A recap is a cost summary of an estimate. The recap included with estimating software shows project costs by category, such as: labor hours, cost of labor, cost of materials, job expenses, and material quotes, etc.

Specifications - A document which describes in detail the technical requirements of materials to be installed on a job.

Scope of Work - Specifies the exact nature of the work to be done.

Sub-contractor Quote - When estimating a project, you will often be required to include items that are out of your expertise, such as data-com systems, concrete work (for light pole bases)or fire alarm systems. The third party to perform the work is your sub-contractor, which would provide you with a quote.

Vendor/Supplier Quote Spreadsheet - A spreadsheet sumitted to contractors in advance showing the requested quoted items such as light fixtures, switchgear and panels, generators, etc. The spreadsheet will also list the various suppliers asked to quote. When the quotes come in, you log them on the spreadsheet. The supplier with the best or most complete price is the one that you would use in your bid. 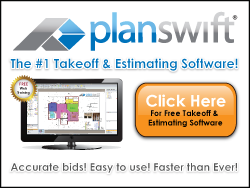